PRINCETON, NJ—America’s day-to-day readiness to manage health emergencies has improved significantly over the past six years according to a nationwide index of health security, though the last year saw relatively slow rates of progress as deep regional differences remain.

Funded by the Robert Wood Johnson Foundation (RWJF), the 2019 National Health Security Preparedness Index shows that the United States scores a 6.7 on a 10-point scale for preparedness. That’s a 3.1 percent improvement over the last year, and a 11.7 percent improvement since the Index began in 2013.

The Index analyzes 129 different measures for each state and the nation—including the percentage of bridges that are in good condition, the prevalence of hazard planning in nursing homes, the number of paramedics and medical volunteers, and other factors—to calculate a composite score providing the most comprehensive picture of health security available. The scores indicate the ability to protect the health security of Americans from incidents like newly emerging infectious diseases, terrorism, and extreme weather conditions at the state and national levels.

“We are seeing some promising national numbers when it comes to our nation’s ability to cope with health emergencies,” said Alonzo Plough, PhD, MPH, chief science officer at RWJF. “Disasters like recent major hurricanes show that to take the next step in increasing our preparedness levels, we must focus on improving equity within our efforts.”

According to the 2019 Index, at the current rate of improvement, the nation will require 10 additional years to reach a strong health security level of at least 9.0. Conversely, if the country improved at the rate achieved by the five fastest-improving states, this threshold could be reached in fewer than six years.

“We’ve seen steady gains nationwide, but some states and regions are falling behind while others are moving ahead,” said Glen Mays, PhD, MPH, who leads a team of researchers at the University of Kentucky in developing the Index. “The overall progress is commendable, but we need to accelerate the pace of improvement and help all regions get stronger. The frequency and intensity of disasters is increasing, and we are all at risk.”

“States and communities have a responsibility to be prepared to respond to health emergencies, and to recover quickly from them,” said Dr. Nancy Messonnier, acting director of CDC’s Center for Preparedness and Response. “Having a comprehensive index helps states see where cross-sector investments and cooperation are paying off and where more effort is needed.”

Based on a sophisticated model informed by experts in public health, emergency management, academia, health care, and other sectors, researchers collect, aggregate, and measure health security using data from more than 60 sources. The final measures fall into six categories, each of which is assessed independently, and cover topics such as: 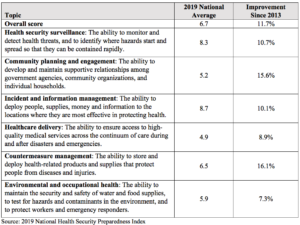 Originally developed by the CDC as a tool to drive dialogue to improve health security and preparedness, the Index is a collaborative effort funded by RWJF involving more than 30 organizations. State and local health officials, emergency management experts, business leaders, nonprofits, researchers, and others help shape the Index.

About the Robert Wood Johnson Foundation
For more than 45 years the Robert Wood Johnson Foundation (RWJF) has worked to improve health and health care. We are working alongside others to build a national Culture of Health that provides everyone in America a fair and just opportunity for health and well-being. RWJF has invested more than $1.2 billion in New Jersey since 1972. For more information, visit www.rwjf.org. Follow the Foundation on Twitter at www.rwjf.org/twitter or on Facebook at www.rwjf.org/facebook.