PRINCETON, NJ—An annual assessment of the nation’s day-to-day preparedness for managing community health emergencies improved slightly over the last year—though deep regional inequities remain. The Robert Wood Johnson Foundation (RWJF) released the results of the 2017 National Health Security Preparedness Index, which found the United States scored a 6.8 on a 10-point scale for preparedness—a 1.5 percent improvement over the last year, and a 6.3 percent improvement since the Index began four years ago.

The Preparedness Index analyzes more than 130 measures—such as hazard planning in public schools, monitoring food and water safety, wireless 9-1-1 capabilities, flu vaccination rates, and numbers of paramedics and hospitals—to calculate a composite score that provides the most comprehensive picture of health security and preparedness available.

“Improving health security and preparedness is important for all communities across the country. In our highly mobile country, national emergency preparedness depends on having high levels of protection in every state, city, and region,” said Alonzo Plough, PhD, MPH, chief science officer and a vice president at RWJF. “These data highlight where strengths and gaps in preparedness lie, and can inform approaches to improve health security throughout America.”

Despite improvements in nearly two-thirds of states, significant inequities in preparedness exist across the nation: a gap of 32 percent separates the highest state (Vermont, 7.8) and the lowest state (Alaska, 5.9). Generally, states in the Deep South and Mountain West regions—many of which face elevated risks of disasters and contain disproportionate numbers of low-income residents—lag behind Northeast and Pacific Coast states.

“Equal protection remains an elusive goal in health security, as rural and low-resource regions have fewer and weaker protections in place,” said Glen Mays, PhD, MPH, who leads a team of researchers at the University of Kentucky in developing the Index. “Closing the gaps in preparedness among states and regions remains a national priority.”

“Health security and preparedness have wide-ranging impact in our communities,” said Stephen C. Redd, MD, RADM, director of the U.S. Centers for Disease Control and Prevention (CDC’s) Office of Public Health Preparedness and Response. “The Index can help us see where investments are producing returns, and where more work is needed to build public health emergency response capacity.”

Based on a model informed by experts in public health, emergency management, government, academia, health care, and other sectors, researchers collect, aggregate, and measure preparedness data from more than 50 sources. The final measures fall into six categories, each of which is assessed independently, and cover topics such as: 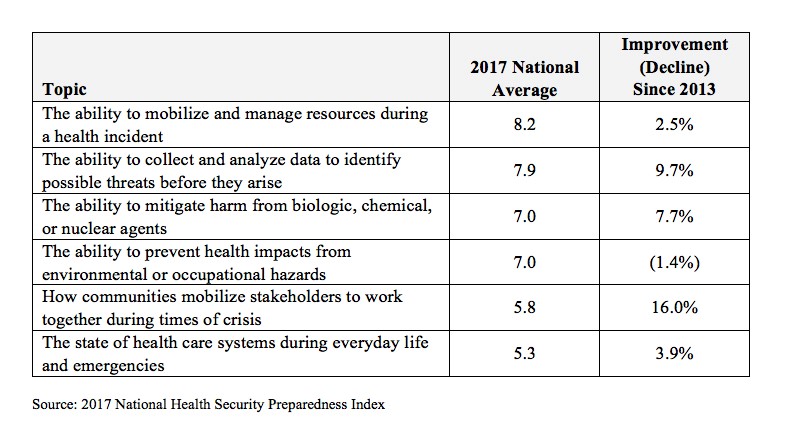 Originally developed by the CDC as a tool to drive dialogue to improve health security and preparedness, the Index remains a collaborative effort involving more than 30 organizations. State health officials, emergency management experts, business leaders, nonprofits, researchers, and others help shape the Index each year through its National Advisory Committee and expert workgroups.

The National Health Security Preparedness Index has launched a Preparedness Innovator Challenge to collect and spread best practices for using the Index to improve preparedness. Through July 31, users will submit their stories about how they used Index findings as a tool to focus efforts and, ultimately, improve health security in their communities.